Results suggest that discussion and debate can help solve concerns about honesty, transparency and inclusivity. 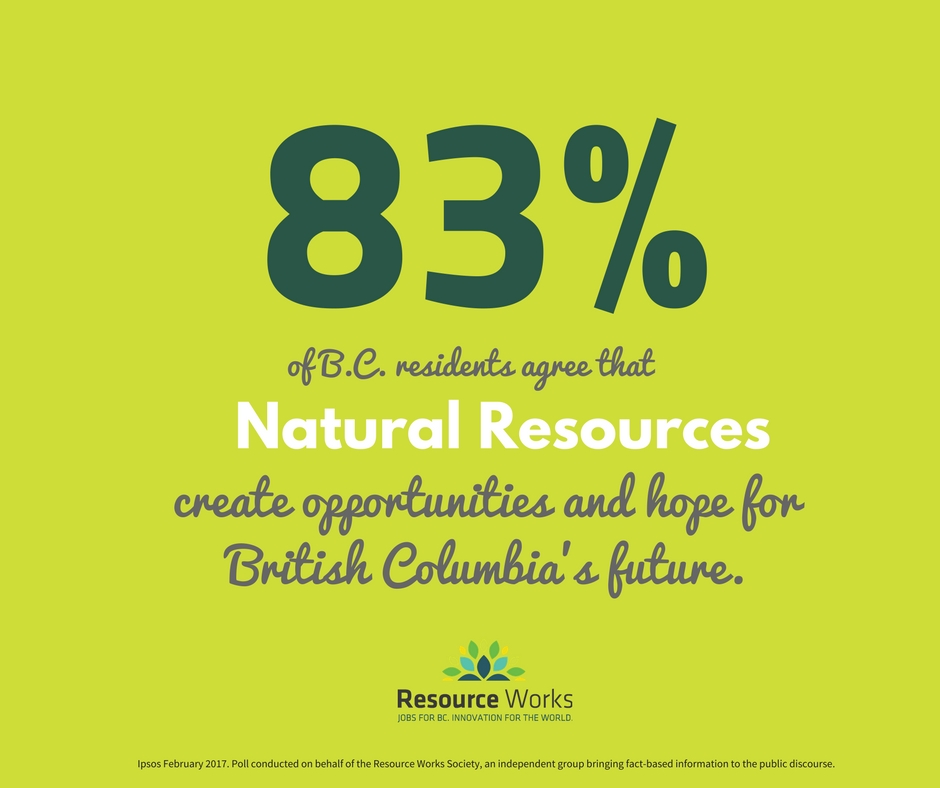 That's the way to help British Columbia figure out how to make natural resource development work for BC, according to 87 per cent of respondents in a recent poll.

Yet many do not have positive things to say about the actual debate and discussion they see taking place in BC today.

Ipsos Reid conducted the omnibus poll for Resource Works in February to gauge the public’s support for natural resource development in general and get their reaction to several statements regarding the debate. The poll also probed how this debate might influence voting decisions in the upcoming provincial election.

The results indicate Resource Works is getting its message across that our continued prosperity relies on a healthy and responsible resource industry sector.

Highlights of the February survey include:

Younger British Columbians in the 18-34 age group were significantly supportive of an open, honest debate around resource issues and more likely to see BC as a world leader in innovation in the natural resource development sector.

However, the poll also indicates there is still much to do to convince British Columbians that the debate over natural resource development is honest and transparent, particularly in the Greater Vancouver area.

As shown in the chart below, while agreement with most of these items is higher in the Interior/North, among men and among younger British Columbians, the numbers are still low and among no segment does a majority think the debate and discussion is ‘transparent’ or ‘honest’.

Further, while most of those surveyed believe that BC's natural resource sector offers good opportunities for employment for younger people (80 per cent on a provincial average), only 76 per cent of those in the 18-34 age bracket expressed support for this statement.

Other areas of concern centre on the attitudes of residents on the continued importance of the natural resource industry sector in the province’s economy, now and into the future. This is particularly evident in the Greater Vancouver area and among younger respondents.

The poll numbers indicate there is a disconnect between voters in Greater Vancouver and the rest of the province when it comes to linking their prosperity with the sustainable development of BC natural resources. Those surveyed in the Greater Vancouver region were the least likely to see the resource sector as being as important to the economy now as it has been in the past and are more pessimistic about its continued importance into the future.

The Ipsos omnibus poll of 800 adult British Columbians was conducted between February 2-7. These data were statistically weighted to ensure the sample's region, age and gender composition reflects that of the actual B.C. population according to Census data. It’s considered accurate to within 3.5 percentage points, 19 times out of 20.

Many of the initial questions posed in the first section of the poll were identical to those asked in a 2014 survey, also conducted by Ipsos. Overall, the results are encouraging, though the apparent changes over time must be treated with caution. The most notable change since 2014 was in the number of British Columbians who believe that natural resource development creates opportunities and hope for BC's future. Significantly fewer respondents were undecided this time around.

"The poll gives us confidence in the growing evidence that Resource Works is on the right track in communicating its key messages of natural resource development being good for the BC economy, creating opportunities and supporting growth through innovation of the green economy," said Stewart Muir, executive director of the Vancouver-based group. "We feel progress has been made in terms of re-framing the debate over natural resource development in a less confrontational manner that the average person can feel more comfortable with."

Elk Valley mines a $1-billion contributor to the provincial economy