What do you call a high-tech resource society driven by green innovation? Read what Resource Works commentator Stewart Muir had to say in this Vancouver Sun article for B.C. Day.

This opinion article by Resource Works executive director Stewart Muir was originally published by The Vancouver Sun on Aug. 1, 2016. The full text is also printed beneath the image here. A related article also by Stewart Muir appears here. 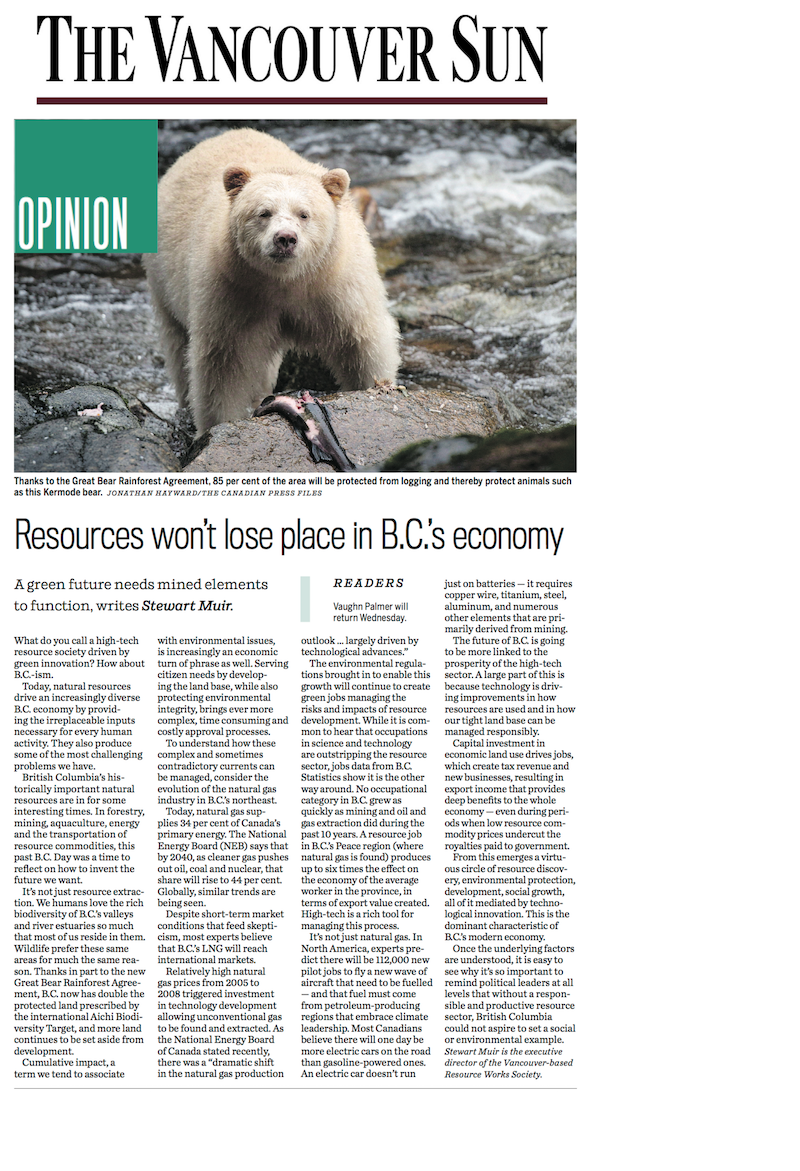 Today, natural resources drive an increasingly diverse B.C. economy by providing the irreplaceable inputs necessary for every human activity. They also produce some of the most challenging problems we have.

On all fronts, British Columbia’s historically important natural resources are in for some interesting times. In forestry, mining, aquaculture, energy and the transportation of resource commodities, this B.C. Day is a moment to reflect on how to invent the future we want.

It’s not just resource extraction. We humans love the rich biodiversity of B.C.’s valleys and river estuaries so much that most of us reside in them. Wildlife prefer these same areas for much the same reason. Thanks in part to the new Great Bear Rainforest Agreement, B.C. now has double the protected land prescribed by the international Aichi Biodiversity Target, and more land continues to be set aside from development.

Cumulative impact, a term we tend to associate with environmental issues, is increasingly an economic turn of phrase as well. Serving citizen needs by developing the land base, while also protecting environmental integrity, brings ever more complex, time consuming and costly approval processes.

To understand how these complex and sometimes contradictory currents can be managed, consider the evolution of the modern natural gas industry in B.C.’s north east.

Today, natural gas supplies 34 per cent of Canada’s primary energy. The National Energy Board (NEB) says that by 2040, as cleaner gas pushes out oil, coal and nuclear, that share will rise to 44 per cent. Globally, similar trends are being seen.

Despite short-term market conditions that feed skepticism, most experts do believe that continuing steady work will ultimately allow B.C. LNG to reach international markets, especially when you consider how we got this far.

Relatively high natural gas prices from 2005 to 2008 triggered investment in technology development allowing unconventional gas to be found and extracted. As the National Energy Board of Canada stated recently, there was a “dramatic shift in the natural gas production outlook … largely driven by technological advances.”

The environmental regulations brought in to enable this growth will continue to create green jobs managing the risks and impacts of resource development. While it is common to hear that occupations in science and technology are outstripping the resource sector, jobs data from B.C. Statistics show it is actually the other way around. No occupational category in B.C. grew as quickly as mining and oil and gas extraction did during the past 10 years. A resource job in B.C.’s Peace region (where the natural gas is found) produces up to six times the impact on the economy of the average worker in the province, in terms of export value created. High tech is a rich tool for managing this process.

It’s not just natural gas. In North America, experts predict there will be 112,000 new pilot jobs to fly a new wave of aircraft that need to be fuelled — and that fuel must come from petroleum-producing regions that embrace climate leadership. Most Canadians now believe there will one day be more electric cars on the road than gasoline-powered ones. An electric car doesn’t run just on batteries — it requires copper wire, titanium, steel, aluminum, and numerous other elements that are primarily derived from mining.

The future of British Columbia is going to be more linked to the prosperity of the high-tech sector in the long run. A large part of this is because technology is driving improvements in how resources are used and in how our tight land base can be managed responsibly.

Capital investment in economic land use drives jobs, which create tax revenue and new businesses, resulting in export income that provides deep benefits to the whole economy — even during periods when low resource commodity prices undercut the royalties paid to government.

From this emerges a virtuous circle of resource discovery, environmental protection, development, social growth, all of it mediated by technological innovation. This is the dominant characteristic of British Columbia’s modern economy.

Once the underlying factors are understood, it is easy to see why it’s so important to remind political leaders at all levels that without a responsible and productive resource sector, British Columbia could not aspire to set a social or environmental example.

Stewart Muir is the executive director of the Vancouver-based Resource Works Society.