Why you should be concerned about Canada's economic path

A record trade deficit shows Canada is not keeping up. Can we get our crude oil to new markets in time to reverse this growing trend? Maybe, but it will take a pipeline. 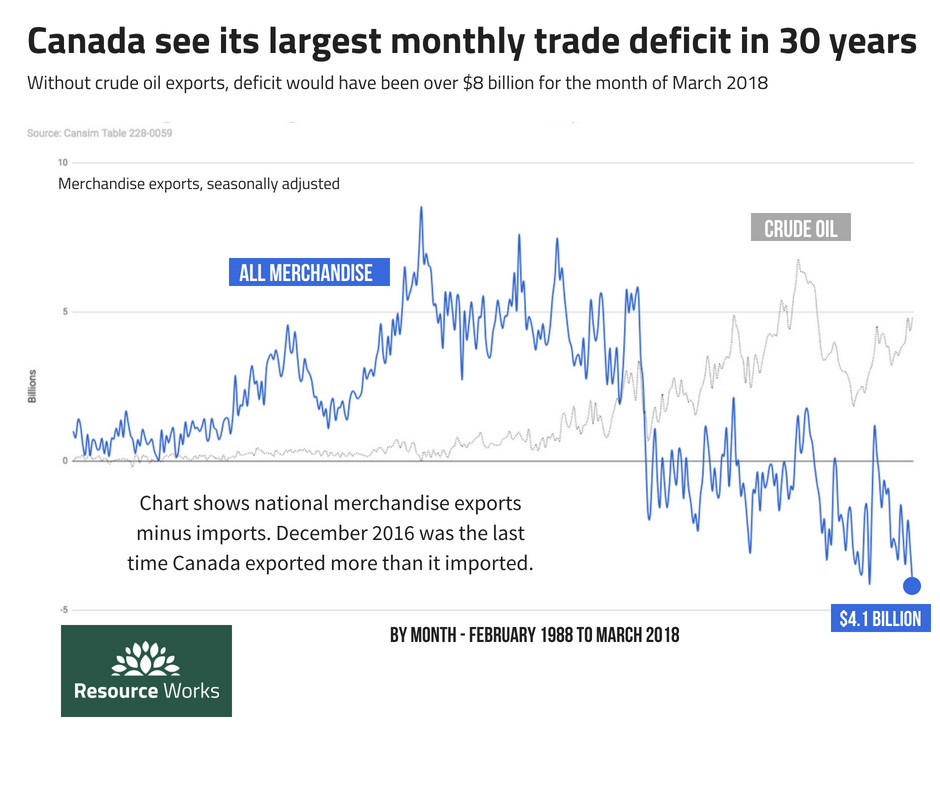 Canada's crude oil exports were worth $342 billion over the past five years, which is why economists like Patricia Mohr like to say it's what "pays the rent" for Canada as a nation.

The chart above suggests a few things. First of all, it illustrates that in three decades there has not been a bigger trade deficit that we see in the newest figures for March 2018. If you take all of our exports and deduct the cost of imported goods, we are in the red. The service economy can help to balance this but we still rely on the trade in commodities as a foundational force in the overall economic health of Canada. The $4.1 billion trade deficit for March is not a good situation.

View the source data for this chart

The chart shows both the All Merchandise trade differential and that for Crude Oil. In recent years, these factors seem to have been tightly correlated, moving up and down in a pretty similar pattern. This suggests that the strong performance of crude oil in generating trade surpluses had a direct impact on keep the national deficit under control.

More recently, however, a new trend has emerged: the detachment of crude oil growth and overall trade deficits. Even though crude oil exports are clearly getting a lot stronger, notice how the trade deficit is only getting worse. What does this mean?

Two factors are likeliest to be in play. One, our consumption of imports is growing even faster than it used to, and faster than our ability to keep up with it.

Secondly, it suggests that other components of the economy such as manufacturing are becoming less effective in achieving trade balance. Crude oil has more riding on it as a result.

Opposition to the Kinder Morgan pipeline twinning is quite relevant to this picture. Our only customer for crude oil today no longer needs it. The United States suddenly has its own sources in great abundance. As they become independent, Canada will lose crude oil export revenue. As a result, the crude oil trade will no longer be as influential a factor in keeping down the size of trade deficits.

For many who support the pipeline project, concerns about environmental protection, maritime safety, and meeting climate commitments have demonstrably been addressed. Canadian crude oil, produced from conventional sources or the bituminous oil sands of Alberta, is tightly regulated and highly prized. Right now, however, we're failing to gets its full and proper price because we lack the pipeline access. This chart should be a wakeup call for anyone who still believes that having the pipeline or not having it is a mere abstraction. There are real consequences to failing to gain the highest realistic revenues for the product.

If global oil benchmark prices continue to rise, Canada could get a lucky break. But without the pipeline, we still won't solve the underlying problem of failing to achieve our potential.