Breaking down Canada's new Cabinet and COP26 with Margareta Dovgal and Josiah Haynes. 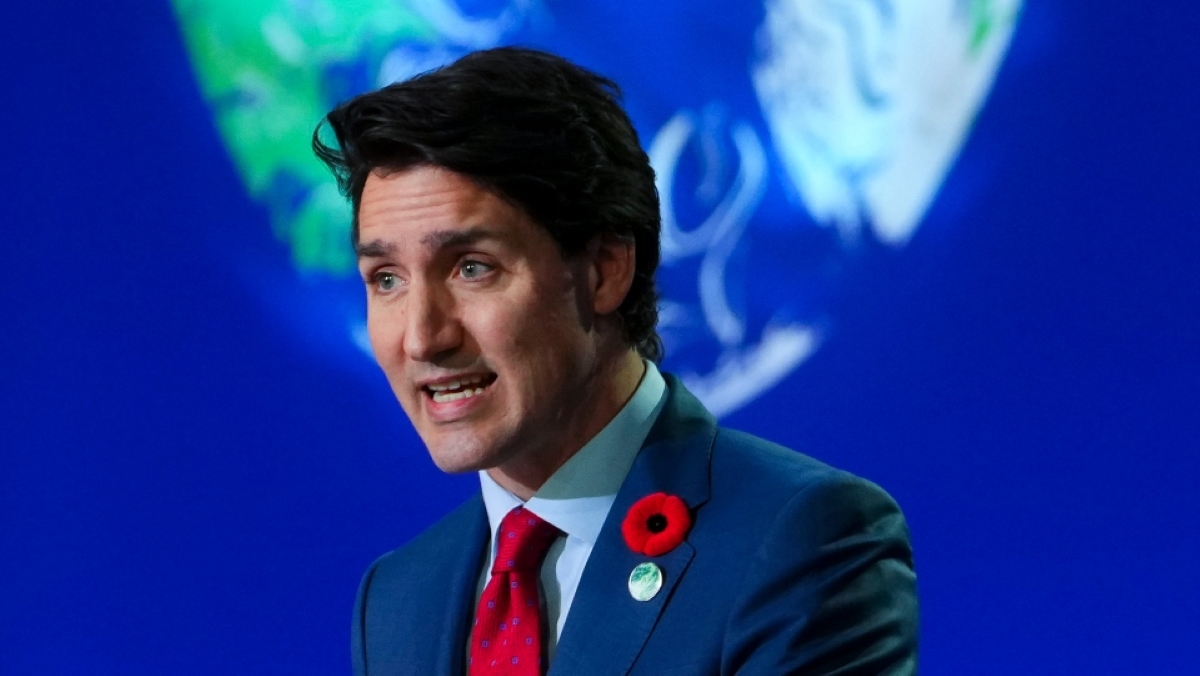 Prime Minister Trudeau at COP26. With files from CTV News.

On October 26th, 2021, the Prime Minister announced a new Cabinet. What does it mean for BC, the Prairies and Canada's natural resource industries? And, with its new Cabinet, what can we expect from Canada's involvement in the current United Nations climate change conference?

On the BC side, our number of Ministers has not changed: we have retained four. However, the composition of their portfolios has changed.

MP Jonathan Wilkinson from North Vancouver has moved from Environment to Natural Resources. Harjit Sajjan in Vancouver South is now Minister of International Development (while Anita Anand has taken up National Defence, from Oakville, ON). Carla Qualtrough from Delta retains the Employment and Disability portfolios while Joyce Murray is now the Minister of Fisheries, Oceans and the Canadian Coast Guard, up from Digital Government.

One of the biggest challenges for the Liberals following this election is accommodating the loss of so many female MPs, whether due to retirements from politics or electoral losses. Many folks will remember that since 2015 the Trudeau government has prided itself on maintaining a gender-balanced — that is to say, a 50% male-female Cabinet. With only 57 female MPs in a caucus of 159, maintaining a gender balance has proved challenging.

The Conservative Opposition has drawn attention to the need for better representation from the Prairies, and this is certainly something with which the Trudeau government must contend. The difficulties of getting Liberals elected in that region continue. There are many reasons why, from the urban-rural divide to resource policies popular among urban consumers but not resource regions.

It's important that the Prairies be included in major decision-making, especially regarding agriculture, mining and oil and gas. The Prairies are both a breadbasket for the country and the source of much of Canada's resource wealth in the form of minerals and massive oil and gas reserves. Decisions made now about energy policy will affect these provinces first. While, ultimately, they will affect the entire country because our economy is sustained by natural resources, energy management decisions disproportionately affect the Prairies due to their higher than average energy needs.

The new Cabinet shuffle sees Manitoba MP Jim Carr's departure from Cabinet (formerly serving as a Special Envoy to the Prairies), the appointment of one of two Liberal Alberta MPs (to Tourism portfolio), and the appointment of one of four Liberal MPs from Manitoba. That Manitoban MP, Dan Vandal, now serves as Minister for Prairies Economic Development Canada, Minister for Canadian Northern Economic Development Agency, and Minister of Northern Affairs.

These two Prairie MPs, Dan Vandal and Randy Boissonnault, have an opportunity to bring new representation to their regions. This is especially true of Vandal in his role as Minister for the new Prairies Economic Development Canada (PEDC) Agency, essentially succeeding Carr as the Liberal's leading voice on the Prairies. 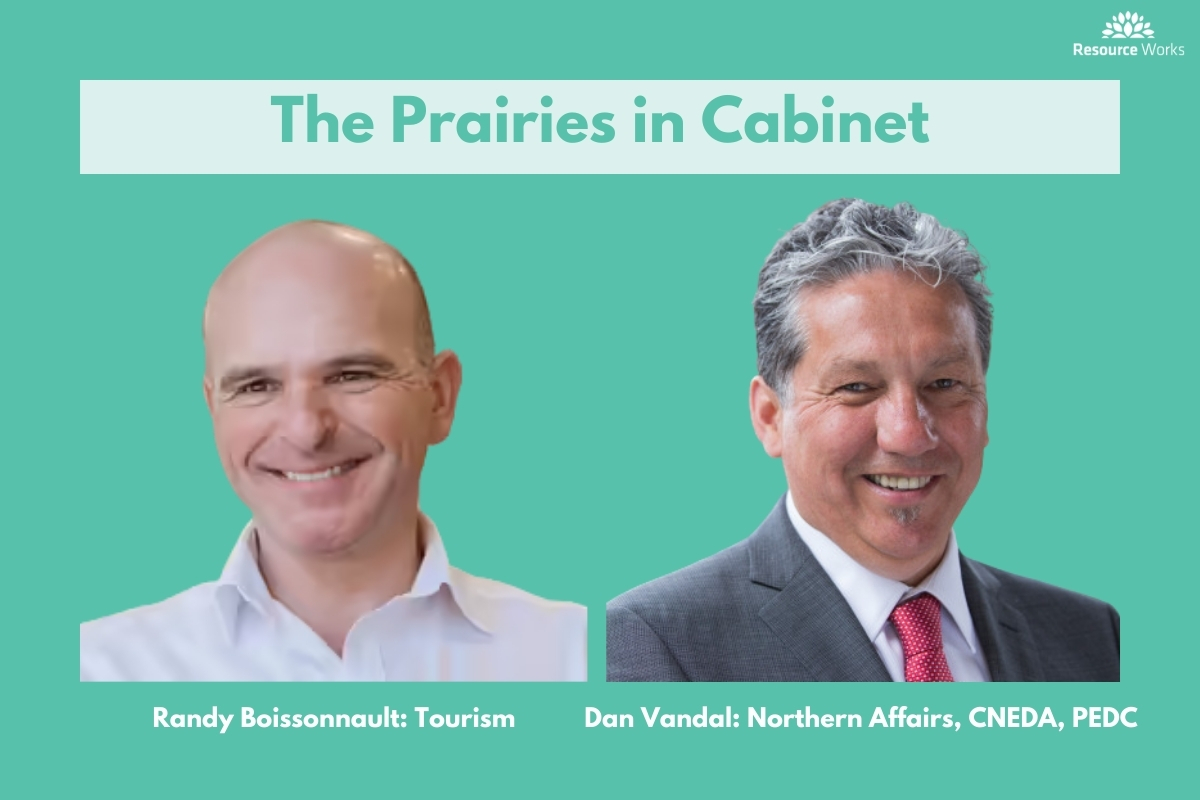 Expectations on energy and mining

There was an encouraging statement from Jonathan Wilkinson since his appointment to Environment Minister. To paraphrase, he tried to allay fears, mostly from Alberta, that the re-elected government wants to curtail Canadian oil and gas production, which falls under provincial jurisdiction. Rather, he emphasized that the government's goal is emissions reduction.

Broadly speaking, that goal aligns with what the energy sector has indicated to be its plan. After all, the major Canadian oil sands producers have committed to net-zero emissions by 2050. Yet singling out oil and gas for a hard cap on emissions, rather than emissions intensity, signals a more aggressive approach to climate action from the new government. As Jesse Kline wrote in the National Post:

"The government could have chosen to cap emission intensity, mandating that the amount of greenhouse gases produced by each individual well or project must decrease over time. This would have allowed the industry to continue expanding, while ensuring that it becomes more energy efficient, effectively balancing environmental protection with economic growth."

While the cap on oilsands emissions, rising carbon prices and appointment of three climate activists to the resource, environment and fisheries portfolios, respectively, signal an intensified climate direction, the government continues its vocal support of both the federally-owned Trans Mountain Expansion project and the embattled Line 5 pipeline. All in all, the new Cabinet continues in a broadly green-capitalist, middle-of-the-road approach to energy.

Let's not forget the other resource sectors. The conversation since the Cabinet announcement has been largely focused on energy and climate, but Canada is also exceptionally strong in forestry and mining. On the mining side, there's a new terminology in investment, "industrial metals". And that's exactly what Canada and BC have in abundance. We'll need more and more of them as we transform our energy systems. 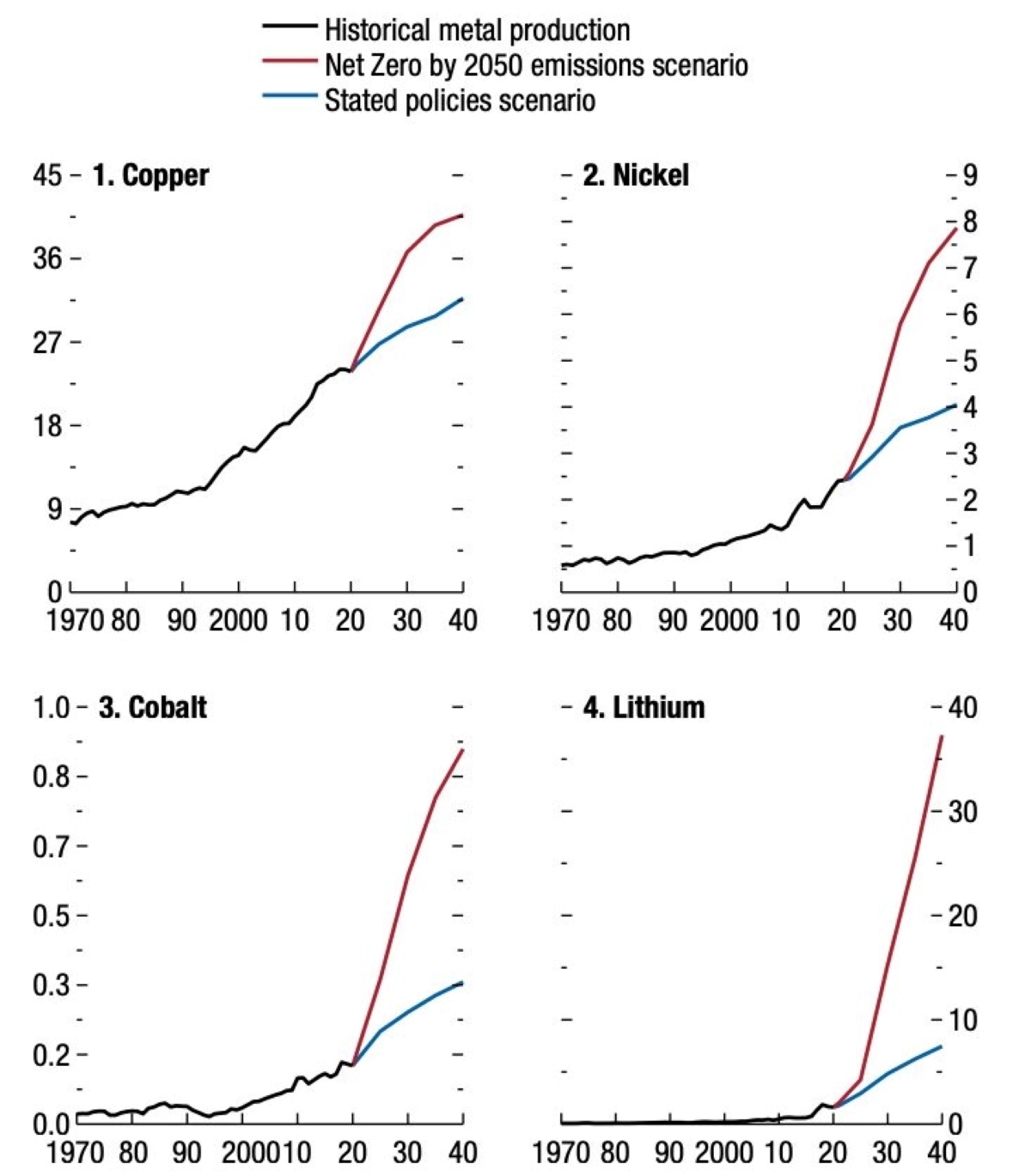 Reaching net zero with as little disruption as possible will require a worldwide mining revolution. Mining at a much greater scale than ever before comes with both challenges and opportunities. Hopefully, the federal government is alive to the idea that funding needs to be driven to support these mining opportunities to reduce emissions down the line. Given that the Canadian mining industry is operating under a significant and growing carbon price, unlike many of its international competitors, harmonizing international emissions accounting should be a priority. Establishing either an international carbon price or carbon market would be a welcome development.

From a newly-minted environmentalist Cabinet to the ongoing UN climate change conference, there has been non-stop talk about climate in the news. Climate conferences and reports are essentially large communications and public relations opportunities — as they ought to be — but they also require careful attention to not only the facts but the precision and context with which the facts are expressed.

As for the actual substance of the meeting, diplomats from 200 countries are debating how to continue delivering on the results reached in Paris six years ago (COP21), which culminated in the Paris Agreement. And although we set global emissions reduction targets (despite them being functionally non-binding) and there's debate about whether those targets (which we are already struggling to meet around the world) are ambitious enough, there continues to be considerable work ahead in the realm of multi-lateral policy solutions for harmonizing emissions accounting and carbon markets.

While shying away from the Paris Agreement's proposed carbon market, Prime Minister Trudeau urged leaders to agree to a minimum international carbon price:

"Just as globally we've agreed to a minimum corporate tax, we must work together to ensure it's no longer free to pollute anywhere around the world."

"That means establishing a shared minimum standard for pricing pollution." 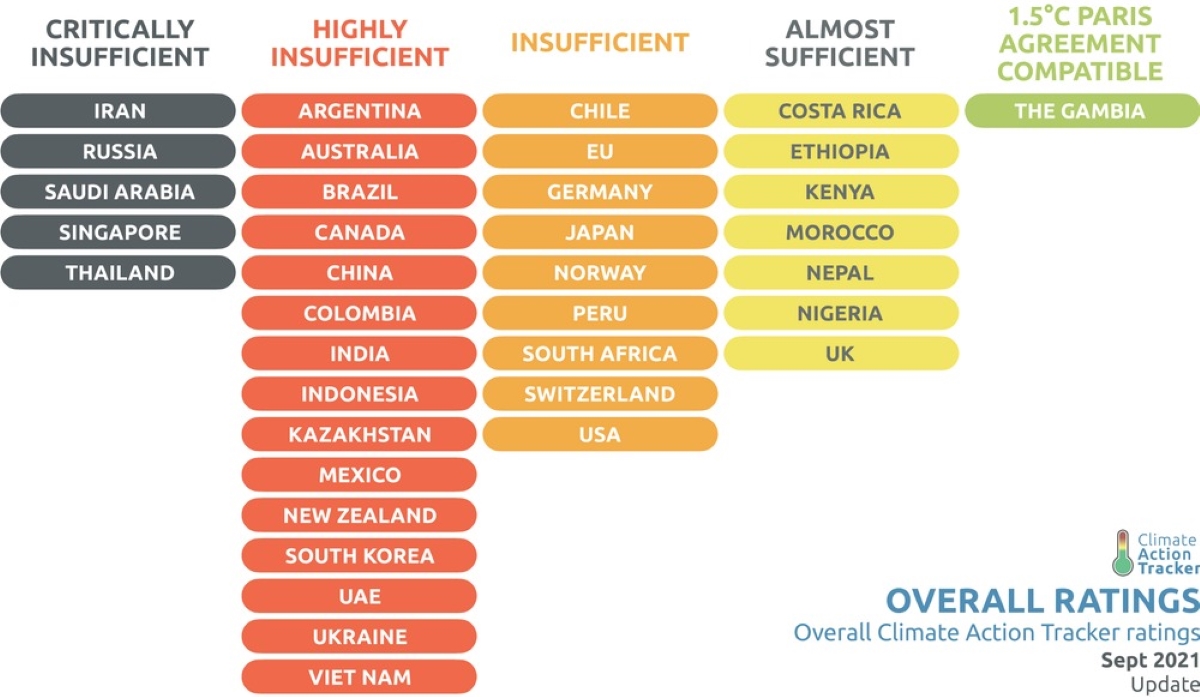 Only one country is on track to reach its Paris agreement commitment, according to the Climate Action Tracker.

While Canadians generally want the country to appear as a world climate leader, it's important to remember that we are an energy-producing country. Any potential talks of international carbon accounting should recognize that the world needs energy and, for the foreseeable future, consumes it primarily through fossil fuels. Energy producers necessarily have higher emissions than consumer states, so a realistic system of carbon accounting (with an accompanying market or pricing scheme) shouldn't penalize the producers on which the world relies.

Beyond accounting and pricing considerations, Canada is a small country with a large, developed economy. On the path to net zero, the impacts on Canadians' lifestyles could be significant. Let's keep in mind that China emits in two days what BC does in a year.

It also bears repeating that within Canada, BC is a major natural gas producer capable of providing comparably much cleaner energy to coal-dependent countries like China. In fact, that's the main added value of Canada's first major LNG export facility, LNG Canada, to the world.

And yet, much of what we are hearing coming out of Glasgow is that Canada is the problem, and its energy exports should be eliminated — at least according to the nay-sayers. That would be a disaster for our economy and the world's ambitious environmental goals. It would also be a disaster for Asian economies looking for realistic ways to get off their coal dependency. Yes, let's talk about climate and energy, but let's not entertain absurd premises. We are still decades away from realistically switching off fossil fuels.

Some of the biggest decisions for our society in decades are now being made. They will have consequential impacts on how our children, our grandchildren and those further on experience this world, whether that's the environment, their type and quality of lifestyle and how interconnected and prosperous their world is.

Whether in Glasgow or Ottawa, we shouldn't forget the lessons of the ongoing energy crisis. Fossil fuels, in one form or another, are necessarily part of the world's energy mix. Until alternative energy can be produced reliably and sufficiently affordably, natural gas, in particular, has a vital part to play in the global energy transformation.

The energy innovation, expertise and talent based in Canada's energy sector should not be forgotten either.

Canada has a lot to offer the world. Our energy sector is a leader in emissions reduction efforts. Collaboration must be the foundation of the path forward.

Margareta Dovgal is the Director of Research at Resource Works Society. A lifelong Vancouverite, she has a Master's degree in Energy, Technology and Climate Policy from University College London.

Josiah Haynes is the Communications and Research Coordinator at the Resource Works Society. Now based in Ottawa, Josiah originally hails from Vancouver Island. Josiah also spends his time writing for Green Growth BC, a new initiative promoting forestry education in the public discourse.