Where do federal parties stand on BC aquaculture?

In December, the federal government shuttered nineteen fish farms on the Discovery Islands, putting over 1,500 Vancouver Island families out of work. With the future of BC aquaculture in question, Josiah Haynes compares where the federal parties stand. 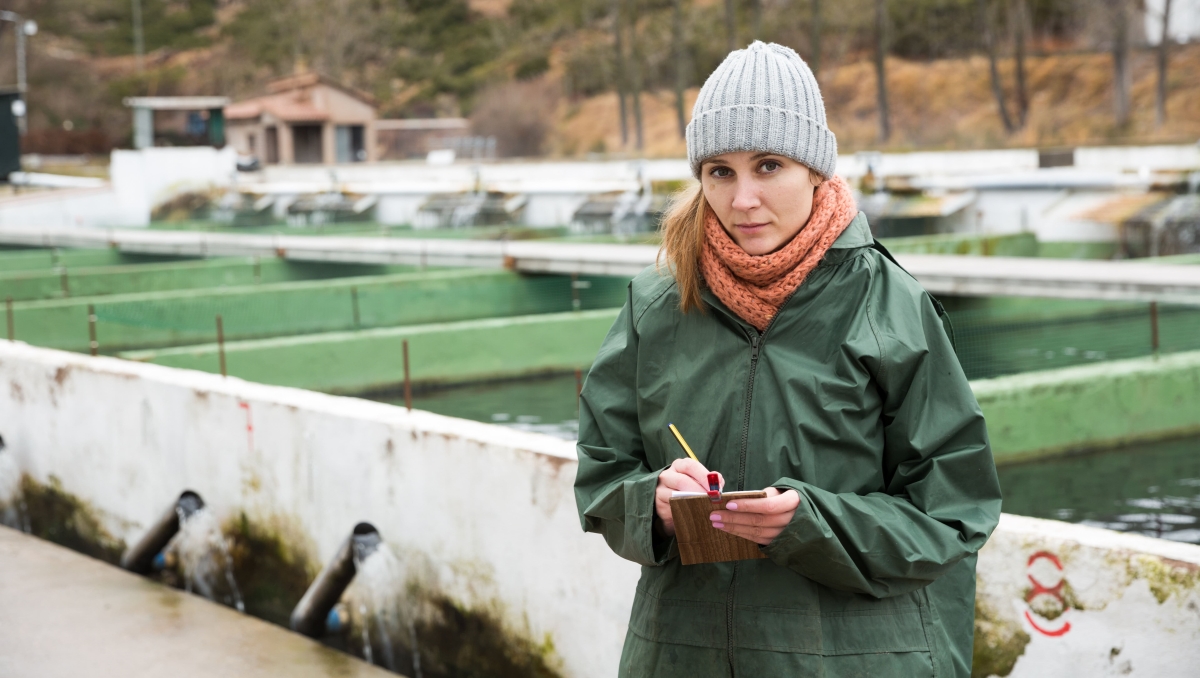 On December 17th, you might have been baking gingerbread men, doing some Christmas shopping, or getting into the holiday spirit. But for 1,500 families on northern Vancouver Island, December 17 meant finding out their jobs will be phased out along with nineteen fish farms on Discovery Island and $379.7 million of lost economic output.

Fisheries and Oceans Minister Bernadette Jordan announced the existing fish farms on Discovery Island will no longer receive the Section 56 FGR licences that allow them to operate. The farms must cease all operations and harvest all remaining fish by June 30, 2022. The decision came after consultation with seven First Nations on the Discovery Islands.

The decision was based on the alleged risk the contained salmon posed on contracting and spreading sea-lice to wild salmon stocks. Recommendation number nineteen of the Cohen Commission recommended open-net salmon farming on the Discovery Islands be phased out unless proof be found that the fish farms posed only a "minimum risk of serious harm to the health of migrating Fraser River salmon."

Yet the risks have been proven minimal, according to nine risk assessment studies published by the DOAF.

In an open letter to Minister Jordan, the Canadian Aquaculture Industry Alliance writes:

"The consultation process employed to reach this decision was superficial: industry was given a single short opportunity to speak with the Minister and local communities were not granted any meeting. Multi-year peer-reviewed federal science establishing a minimal impact of farms to wild salmon was sidelined. This decision does not bring people together to create a pathway towards real reconciliation."

In another open letter to the Minister, the mayors of Campbell River, Port Hardy, Gold River, and Port McNeill, as well as the board of directors of the BC Salmon Farmers Association write:

"We feel disposable and discarded—locally-elected officials, salmon farmers, seafood processors, technology and transportation suppliers, and small business owners. So, we ask: What is your plan now to help our communities recover from your decision?"

So, where do the federal political parties stand?

The Liberal Party's 2019 platform promises that a Liberal government "will work with [BC] to develop a responsible plan to transition from open-net pen salmon farming in coastal waters to closed containment systems by 2025." The Discovery Island closures were, after all, mandated by the Liberal government.

Back in 2019, The Conservative Party made some promises under former leader Andrew Scheer regarding creating a modern Aquaculture Act and "Support[ing] technology and practices that aim to keep wild and farmed salmon apart," among other commitments.

More recently, the current Conservative Critic for the DOF, Richard Bragdon, and the role's former occupant, Mel Arnold, released a joint statement criticizing the closure of operations in the Discovery Islands:

"By simply setting a date for banning open net-pen finfish production operations in the Discovery Islands without a comprehensive plan in place to facilitate potential transitions for operators and their employees, you have put nearly 6,500 jobs in British Columbia on notice of termination. These workers for whom you have no plan for supporting are largely located in communities that have already experienced severe downturns in employment." 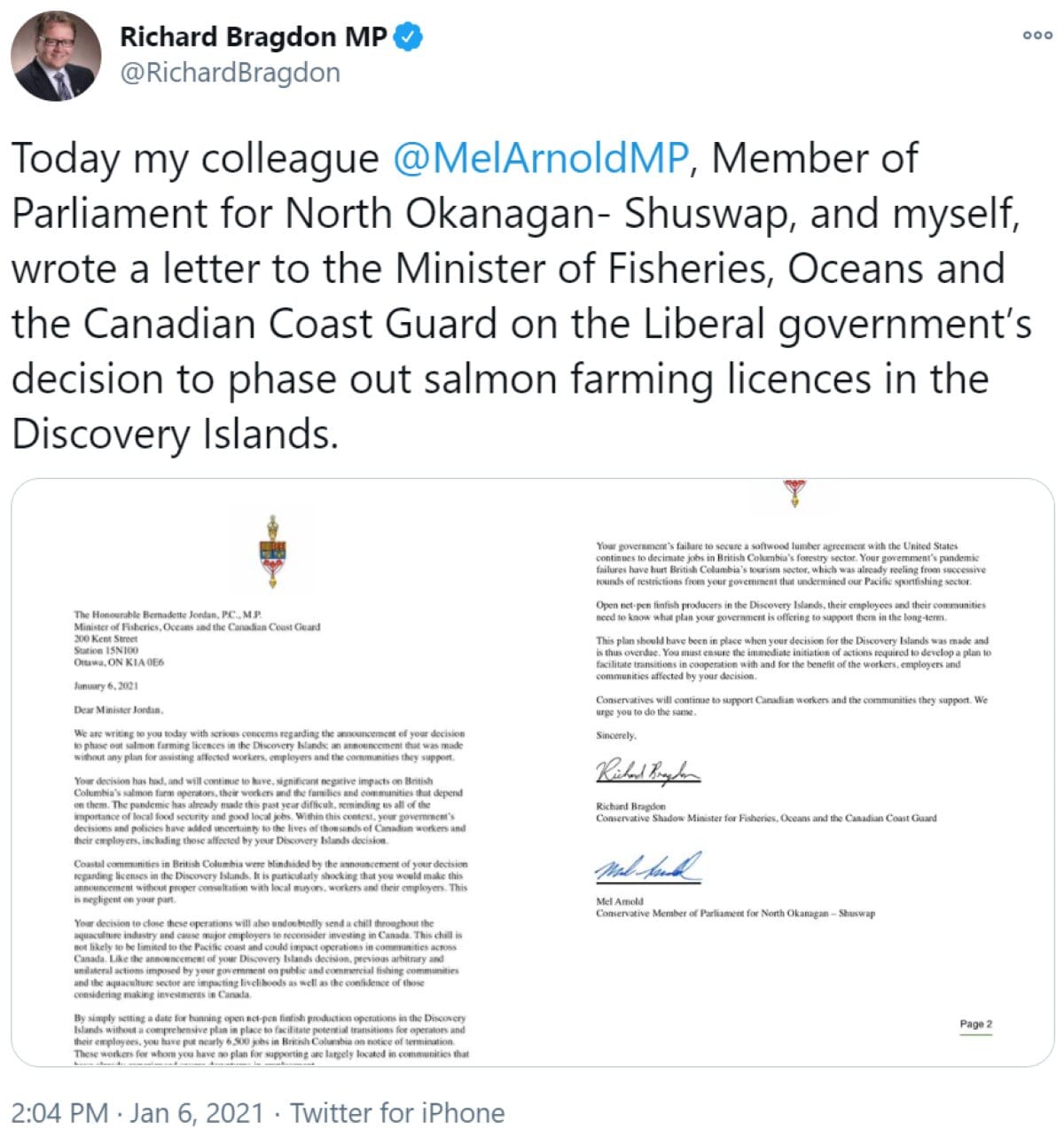 As for the NDP, MP Gord Johns of Courtney-Alberni, the party critic for the Oceans and Fisheries, released a statement saying:

"The government has known for years that salmon farms have had a negative impact on migrating juvenile Fraser River sockeye, so today’s announcement is a win for wild salmon and the communities that rely on it. I wish the government hadn’t wasted all that time getting to today. What’s needed now is a strong transition plan for the affected workers and impacted communities."

Meanwhile, Rachael Blaney, MP for North Island-Powell River, calls for an urgent regional economic development summit for northern Vancouver Island to discuss "an economic transition plan for this region" in the wake of Jordan's announcement.

According to its 2019 platform, the Green Party promises, "By 2025, [to] move all open-net pen finfish aquaculture facilities into closed containment systems on land. As with land farmers transitioning from conventional production, provide financial and extension support to fish pen workers to make this transition." 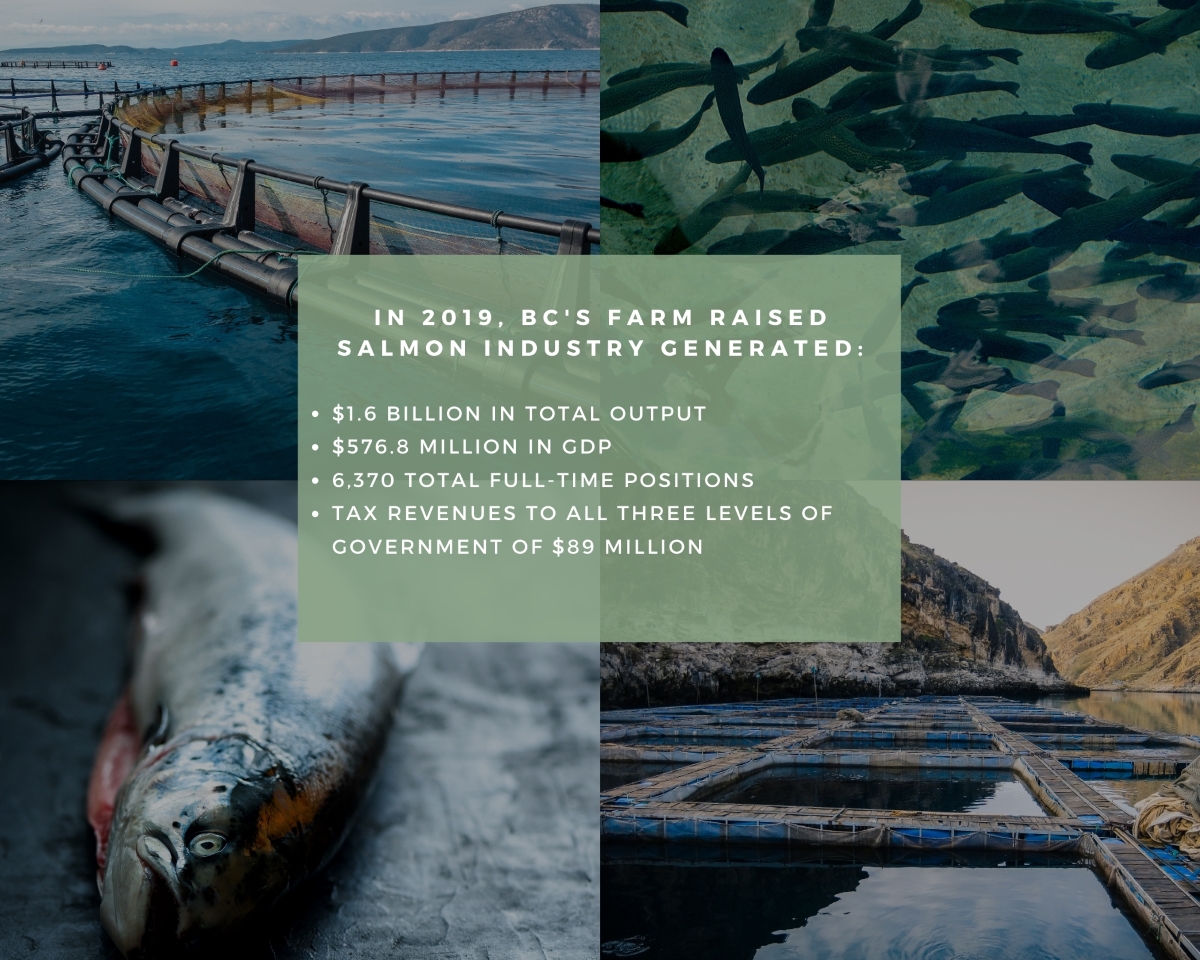 Salmon farming is an important industry in Canada, with 137,500 tonnes of farmed salmon being produced in 2018 and BC responsible for 63% of the sum. A BC Salmon Farmers report, Raising Opportunity, highlights some key figures:

And in 2019, the farm-raised salmon industry had this impact on BC's economy:

The report also adds: "The BC salmon farming industry already has the smallest environmental footprint of all animal protein-producing industries. With a low carbon footprint, low land use, low water consumption, and efficient feed conversion ratio, farmed salmon contributes a healthy and climate-friendly protein source to the world’s food needs."

With thousands of jobs, millions of tax dollars, and billions of dollars in output, BC's aquaculture industry shouldn't be an afterthought for federal political parties. The industry can be a significant part of any plan for post-COVID-19 economic recovery while helping Canada reduce GHG emissions. The time is ripe for renewed federal leadership in economically realistic, scientifically sound, and environmentally responsible aquaculture policy.