Gift shopping for a resource realist? Here are five 2018 titles worth a look

From the 10 reasons eco-pessimists are wrong about the world to how energy has shaped civilization, these books challenge and expand our knowledge of humanity and nature.

Have you got an ecomodernist on your Christmas shopping list? Chance are you do, since 62% of people we surveyed identified with ecomodernist values. Here are some books they'll be interested in.

Population Bombed! Exploding the Link Between Overpopulation and Climate Change

By Pierre Desrochers and Joanna Szurmak

The dire warnings are everywhere these days about catastrophic climate change, particularly the perils of overpopulation and the burning of fossil fuels.

The University of Toronto - Mississauga’s Pierre Desrochers and York University's Joanna Szurmak see it another way. In their new book published this fall, Desrochers, an associate professor of geography, and Szurmak, a researcher and doctoral candidate, caution that “population alarmism” and campaigns against carbon will stifle development, innovation and the creativity necessary to solve global problems.

Titled Population Bombed! Exploding the Link Between Overpopulation and Climate Change, the book’s publication comes 50 years after The Population Bomb, by Stanford University biology professor Paul Ehrlich, caused a sensation by predicting imminent environmental collapse followed by mass starvation – none of which happened. It is published by the Global Warming Policy Foundation.

Desrochers and Szurmak write that the predictions of doomsters have not been borne out by reality, and this is not the time to listen to them. They challenge the notion that limiting population growth globally by having fewer children is far from being the most effective way to prevent dangerous climate change. They argue, to the contrary, that economic development, supported by population growth and the increased use of carbon fuels, is the only practical way, now and in the near future, to raise living standards worldwide, to build resilience against any downsides of increased anthropogenic greenhouse gas emissions, and to make possible a sustained reduction of humanity’s impact on its environment.

For a mini-preview of Population Bombed!, we highly recommend this essay in Quillette, which also discusses some of the other books further down this list. 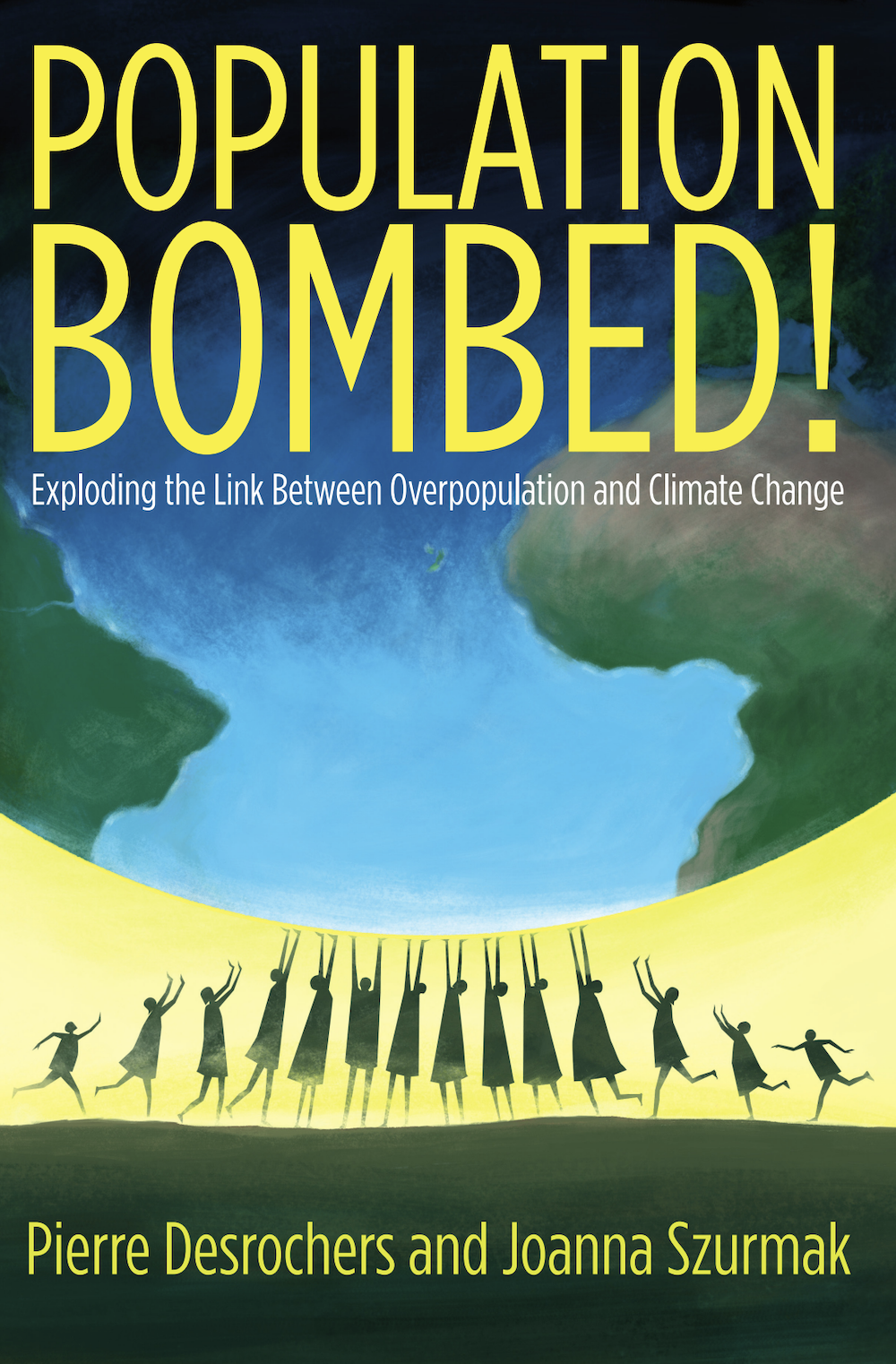 Factfulness: Ten Reasons We're Wrong About the World—and Why Things Are Better Than You Think

When asked simple questions about global trends—what percentage of the world’s population live in poverty; why the world’s population is increasing; how many girls finish school — we systematically get the answers wrong. So wrong that a chimpanzee choosing answers at random will consistently outguess teachers, journalists, Nobel laureates, and investment bankers.

In Factfulness, Professor of International Health and global TED phenomenon Hans Rosling, together with his two long-time collaborators, Anna and Ola, offers a radical new explanation of why this happens. They reveal the ten instincts that distort our perspective—from our tendency to divide the world into two camps (usually some version of us and them) to the way we consume media (where fear rules) to how we perceive progress (believing that most things are getting worse).

It turns out that the world, for all its imperfections, is in a much better state than we might think. That doesn’t mean there aren’t real concerns. But when we worry about everything all the time instead of embracing a worldview based on facts, we can lose our ability to focus on the things that threaten us most.

Inspiring and revelatory, filled with lively anecdotes and moving stories, Factfulness is an urgent and essential book that will change the way you see the world and empower you to respond to the crises and opportunities of the future.

Bill Gates is a big fan of this book and reviewed it here.

Energy and Civilization: A History

This 2017 book is freshly available in paperback and for those unfamiliar with the work of Winnipeg academic Vaclav Smil, it's an opening into a rationalist oeuvre that more people should be aware of. It is described as a comprehensive account of how energy has shaped society throughout history, from pre-agricultural foraging societies through today's fossil fuel–driven civilization.

Bill Gates is also a fan of Smil and says of this title that he placed on his Best Books of the Year list: "I wait for new Smil books the way some people wait for the next 'Star Wars' movie. In his latest book, Energy and Civilization: A History, he goes deep and broad to explain how innovations in humans' ability to turn energy into heat, light, and motion have been a driving force behind our cultural and economic progress over the past 10,000 years."

Smil describes humanity's energy eras in panoramic and interdisciplinary fashion, offering readers a magisterial overview. This book is an extensively updated and expanded version of Smil's Energy in World History (1994). Smil has incorporated an enormous amount of new material, reflecting the dramatic developments in energy studies over the last two decades and his own research over that time.

His big idea is that energy is the only universal currency; it is necessary for getting anything done. Smil provides a comprehensive account of how energy has shaped society, from pre-agricultural foraging societies through today's fossil fuel–driven civilization.

Humans are the only species that can systematically harness energies outside their bodies, using the power of their intellect and an enormous variety of artifacts―from the simplest tools to internal combustion engines and nuclear reactors. The epochal transition to fossil fuels affected everything: agriculture, industry, transportation, weapons, communication, economics, urbanization, quality of life, politics, and the environment.

Light of the Stars: Alien Worlds and the Fate of the Earth

Light of the Stars tells the story of humanity’s coming of age as we awaken to the possibilities of life on other worlds and their sudden relevance to our fate on Earth. Astrophysicist Adam Frank traces the question of alien life and intelligence from the ancient Greeks to the leading thinkers of our own time, and shows how we as a civilization can only hope to survive climate change if we recognize what science has recently discovered: that we are just one of ten billion trillion planets in the Universe, and it’s highly likely that many of those planets hosted technologically advanced alien civilizations. What’s more, each of those civilizations must have faced the same challenge of civilization-driven climate change.

Written with great clarity and conviction, Light of the Stars builds on the inspiring work of pioneering scientists such as Frank Drake and Carl Sagan, whose work at the dawn of the space age began building the new science of astrobiology; Jack James, the Texas-born engineer who drove NASA’s first planetary missions to success; Vladimir Vernadsky, the Russian geochemist who first envisioned the Earth’s biosphere; and James Lovelock and Lynn Margulis, who invented Gaia theory. Frank recounts the perilous journey NASA undertook across millions of miles of deep space to get its probes to Venus and Mars, yielding our first view of the cosmic laws of planets and climate that changed our understanding of our place in the universe.

Thrilling science at the grandest of scales, Light of the Stars explores what may be the largest question of all: What can the likely presence of life on other worlds tell us about our own fate.

Enlightenment Now: The Case for Reason, Science, Humanism, and Progress

Enlightenment Now describes how the values of the Enlightenment, science, reason, humanism, and progress, keep improving our world until today, making it a better place day by day, despite the negative news. According to its review in The Guardian:

"Enlightenment Now is a bold, wonderfully expansive and occasionally irate defence of scientific rationality and liberal humanism, of the sort that took root in Europe between the mid-17th and late 18th century. With Donald Trump in the Oval Office, populists on the march across Europe and US campuses at the centre of yet another culture skirmish, the timing of the book requires little explanation.

"Pinker is up for a fight, and his main weapon is quantitative data. Two thirds of the book, which is a kind of sequel to his bestselling The Better Angels of Our Nature, consists of chapter after chapter of evidence that life has been getting progressively better for most people. “How can we soundly appraise the state of the world?” he asks. “The answer is to count.” The litany of facts is awesome, covering health, wealth, inequality, the environment, peace, democracy and on and on, though one wonders if there is any possible tipping point within this deluge where a doubter might suddenly be convinced."