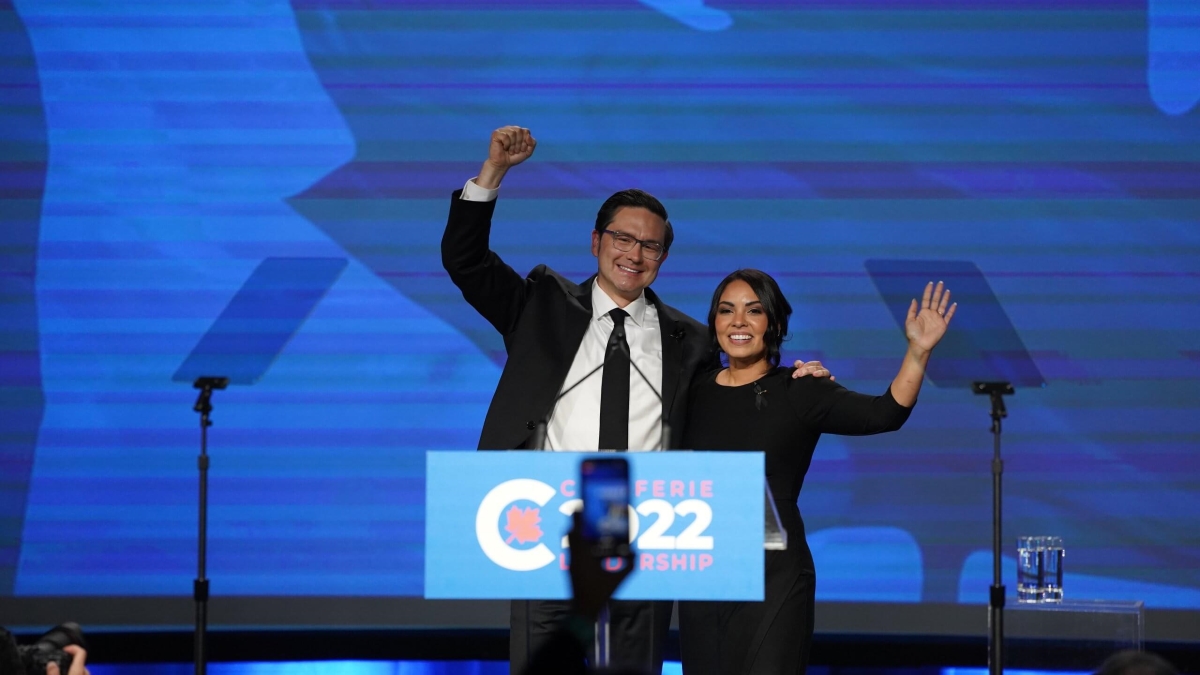 Pierre Poilievre, new leader of the Conservative Party of Canada with Anaida Poilievre.

In his Saturday night speech, Pierre Poilievre boiled his climate action plan down to a simple statement: tech not taxes. What did he mean by this and what are its implications for the current trajectory of climate action in this country?

Among those questioning Poilievre’s approach will be Liberals who have spent all of their time in office vowing tougher measures to fight climate pollution. We can also expect to hear from green business developers who argue that tax-induced price signals are the way to boost early stage innovations that don’t yet enjoy the benefits of scale. They will argue that a national government that fails to provide consistent climate policies will create confusion for industry, resulting in the loss of investment and climate progress.

Poilievre has an unexpected ally in pursuing a different approach. He will be able to point to Joe Biden’s $700 billion climate bill that is based on the “tech not taxes” mantra. Canadian progressives who are critical of the Conservative approach will have to explain why they are not equally dismissive of the Biden administration’s dislike of carbon taxes.

It’s obvious that tens of billions in investment have already been driven away by the current Canadian approach to climate policy. Industry rightly complains of regulatory confusion and a sense that no innovation is acceptable if it’s from the oil and gas sector. Like a stack of pancakes, the climate measures seem to just pile up, with scant regard for the nexus with energy policy. Policies we have seen to date include not only carbon pricing, but also regulations on methane emissions and refined fuels.

Accompanying this 'stick' is a load of 'carrot' measures, including more impressive direct funding for innovation in clean technology than any previous government. That said, the federal government clearly prefers to disincentivize emitters by piling up the regulations. The latest addition to the stack is the July 2022 discussion document entitled “Options to Cut Oil and Gas Sector Greenhouse Gas Emissions to Achieve 2030 Goals and Net-Zero by 2050”, which singles out the domestic oil & gas sector for higher carbon pricing. Businesses are already arguing that this could hammer Canadian industry while rewarding less responsible global producers.

In contrast, the Biden administration rescued its Inflation Reduction Act from near certain legislative death by accepting the objections of carbon tax opponents, in particular those of Republican Senator Joe Manchin, and not bowing to pressure to implement a federal carbon tax.

The Biden approach is all carrot, no stick. What could have been a political rout for the Democrats ahead of the midterm elections became a trophy achievement. The bill includes an enhanced carbon capture tax credit and spurs other climate-friendly technologies including hydrogen, advanced nuclear reactors, and sustainable aviation fuel.

Over the past decade, there has been a sea change in the thinking of Canada’s energy companies. Large and small, they are moving quickly to develop net-zero energy sources that can be shipped to customers around the world. This should be encouraged, not crushed.

As Canadian energy scholar Vaclav Smil points out, even though new renewable energy grew 50-fold in the past two decades, global dependence on fossil fuels declined only marginally, from 87 per cent to 85 per cent of total supply.  Too many policies are based on the refusal to recognize just how challenging it will be to achieve net zero emissions by 2050.

Market incentives are a defensible approach provided they result in cleaner, more sustainable solutions. Poilievre truly does have the opportunity to deliver needed climate medicine in the form of a coherent tech plan, while also delivering on his resource development and Indigenous economic reconciliation promises, as long as he gets the details right in the crucial arena of carbon policy.